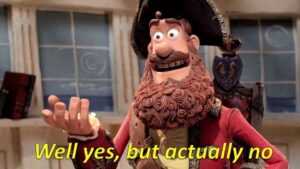 “Well yes, but actually no” was a misquoted line from the character Pirate Captain. This character is found in the British-American animated short film So You Want to Be a Pirate! This misquote gained popularity from a simple image macro, starting in February of 2016.

On August 28th, 2012, an animated motion comedy film called The Pirates! In an Adventure with Scientists was released on DVD and Blu-Ray in the United States. Along with this film, an 18-minute additional animated short film called So You Want to Be a Pirate! was included. Pirate Captain, voiced by Hugh Grant, is asked if his beard is luxuriant due to shouting. The Pirate Captain answers “Good guess, but actually no,” which was famously misheard as “Well yes, but actually no,” due to pronunciation.

In February of 2019, Redditor Garry Boldwater posted this misquoted image, based on the scene above, and in only two days received over 130 up-votes. Following Garry’s post, this misquote was made into countless different memes using the same image but different text. These newly made memes brought in over 23,000 up-votes in only two days. Shortly following the rise of popularity, a news outlet called Stayhipp posted multiple memes using this quote, “Well yes, but actually no” with different text situations (shown below). 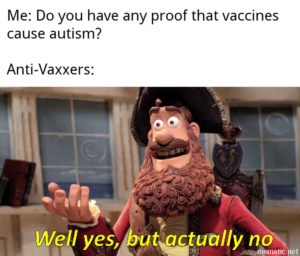 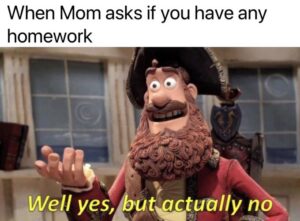