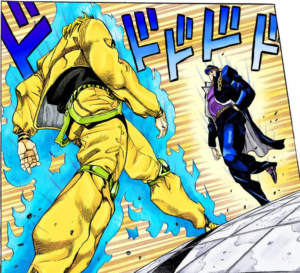 “Oh? You’re Approaching Me?” is taken straight from an anime series called  JoJo’s Bizarre Adventure. This significant quote comes from a scene in which two characters by the names of Dio Brando and Jotaro Kuju proceed toward each other. Later on, this quote was made famous through fan edits and alternative versions of this exact scene posted on social media.

It begins with the visibly angry Jotaro walking towards Dio, who asks “Oh? You’re approaching me? Instead of running away, you’re coming right to me?” Jotaro responds with “I can’t beat the shit out of you without getting closer.”  In 2015, Stardust Crusaders was made into an anime show, with this exact scene being aired July 15, 2015, appearing in episode 46 of “DIO’s World, Part 2.” 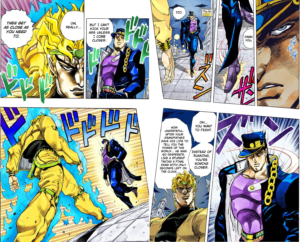 Upon airing in 2015, edits began to surface using Dio’s famous quote, with the earliest post being found on Tumblr. June 13th, 2015 user scarymonstersasc posted a meme for the upcoming E3, gaining over 3,800 notes, which is shown below.

Shortly following scarymonstersasc’s post on Tumblr, edits were made including other characters such as Koichi, or alternate versions of this scene, gaining many views on social media.