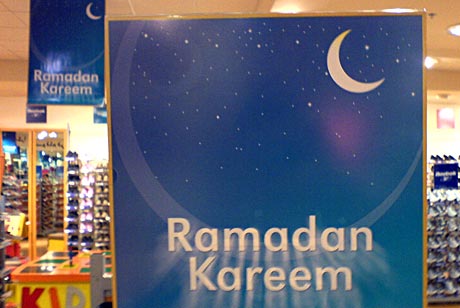 Now it is Ramadan, the holy month for the muslim world. It’s a month of prayers, fasting and celebration during the night. People in arab countries are not allowed to drink, smoke or eat during the day. They do a lot of charity and give gifts to each other at the end of Ramadan.

I’d like to show some of the symbology assocaited with Ramadan. If you’re a christian, think of this list as a the muslim xmas tree, jingle bells, santa, etc…

The muslim calendar is based on lunar phases. And the month of Ramadan covers a full cycle. Therefore the most widely used symbol is the night sky.

Let me take the opportunity here to ask everyone who works on such a layout not to put stars in the empty (dark) area of the moon. See bad example above. If there were stars in the empty area, it would mean those stars are between the earth and the moon. So, just keep that area starless please.

A cannon is fired just when the sun goes down and is used to signal the very first second when people are allowed to eat after the whole day of fasting. It’s kind of a social activity to gather around the cannon with sandwiches and drinks in hand waiting for the cannon to go off.

The Ramadan drummer. El Misaharaty is the name given to the person who walks and beats a drum in residential areas to wake people up to eat their sohor (a meal eaten before the beginning of the fast) before morning prayers. It’s not practiced anymore in modern cities. Alarm clocks replaced the drummer.

The Ramadan lantern. This lamp is basically a colorful storm lamp and it comes in dozens of different forms and shapes. Children in small groups wearing colorful embroidered clothes carry and swing these lamps while singing a traditional song. They are rewarded with nuts and candies. Much like during Christmas in the US.

The holy book. The main focus this month is prayers, so the Koran is an important part of the symbology. Rarely used for commercial materials, because of its stong religious connotations, but one can see it in greeting cards and other more personal communication.

Arabic calligraphy is very much associated with religion, therefore it’s also part of Ramadan and used quite often. Verses from the Koran are visualized in endless number of different forms and styles. Creating a unique calligraphy requires great skill, therefore only the more sophisticated design pieces feature this form of art. Read more about it here.

During this month muslims go to the mosque even more regularly for prayers. The big famous mosques are not usually shown in this context. Usually it’s a siluette of a lonely building in setting sun. Interesting to note that around mosques there is usually a lot of charity food being distributed to the less fortunate as part of the Ramadan traditions.

The fruit of the date palm is an important symbol because many break their fast by eating a piece of date and drinking a sweet juice. One should not break the fast with any heavy food. It takes time for the digestive system to kick start. It is told, that you can survive on a glass of milk and 10 pieces of dates a day for any amount of time.

Ramadan is about fasting during the day but it’s also about feasting during the night. Wonderful dinners (or so called Iftars) served in tents. Many times such social dinners are accompanied with water pipes and soft music. Theoretically one should eat the bare minimum, but it’s rarely the case nowadays.