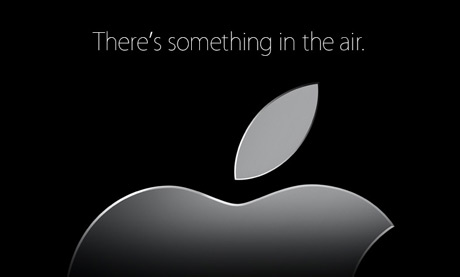 Against all odds the brand new MacBook Air isn’t an ultrathin WiFi MacBook. Hey, we’ve had WiFi for like 10 years, what’s new about that? It’s so much more cooler than that!

The new MacBook Air features a sophisticated electronic nose called iSmell. It can detect smells and lead you to them via the brand new Mac OS X app SmellCompass.

The iSmell is a similar device to iSight and it comes built in all Apple laptops now called MacBook Air and MacBook ProAir. For your Cinema Display’s and now completely obsolete MacBook’s you can buy an add on iSmell device that sits neatly on the top of your laptop and sniffs periodically. When it detects an interesting smell if alerts you on the screen and you can move around your MBPA to find the source of the smell. While some say iSmell is a little bulky we at creativebits don’t mind as the nostrils double as pencil sharpeners. It’s clear that Apple never forgets his main target audience — the designers. It’s the little things, like these sharpener nostrils that make Apple products great!

It was expected from Apple to focus on the next area of sensory input after iTunes, iSight and iTouch. But I expect iSmell to be a flop, like the iPhone was. Nobody will buy a an electronic nose for 600 bucks… — commented Dworak.

Critics noted that the product name iSmell isn’t particularly lucky as it sounds like you’re confessing your geek hygiene habits, but the Apple marketing dept dismissed saying: “After the Wii anything goes!”

It is great when you’re on the road and feel like having a Double Latte Grande Frapuccino and can’t see the huge Starbucks sign in front of you. And, it’s life saving at the Airport when you are desperately trying to find the public restroom. Love the innovative arrow device in SmellCompass that shows you where to go. It’s all about user experience and Apple delivered again. — said Pogue.

Rumor says we can expect a brand new product called iLick in late 2008, which is essentially a trackpad that lets you taste objects on the screen while being able to navigate the cursor at the same time with your tongue. Some sources indicate a joint promotion with Hustler to launch the new product, but of course we don’t care about rumors. I will only believe if I can lick myself!

Update: i6thsense will be released shortly after the keynote without an announcement. It will not be available at the Apple Store or anywhere else publicly, but according to a TUAW insider you will instinctively know where to get it.