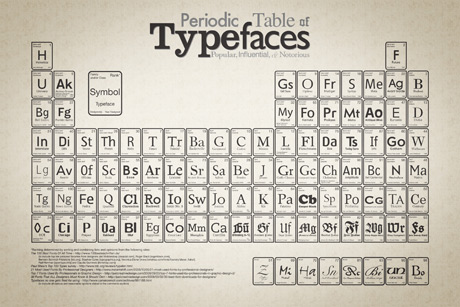 The Periodic Table of Typefaces is obviously in the style of all the thousands of over-sized Periodic Table of Elements posters hanging in schools and homes around the world. This particular table lists 100 of the most popular, influential and notorious typefaces today.

Each cell of the table lists the typeface and a one or two character “symbol” (made up by me simply based on logic), the designer, year designed and a ranking of 1 through 100.

Ranking was determined by statistically sorting and combining lists and opinions from the the sites listed below. The final overall ranking was achieved depending on how many lists the particular typeface was presented on and it’s ranking on the lists (if the particular source list used a ranking system; some did not, in which case just the typeface’s presence on the list boosted it’s overall score.) After averaging the typefaces appearances and rankings a composite score was given and the list was sorted on a spreadsheet then finally given an overall score of 1 through 100 based on its final resting position.

Unfortunately, the typefaces could not be sorted exactly numerically on the table while at the same time keeping them in groups of families and classes. It had to be one or the other. Of course it COULD have been done but I would have had to seriously sacrifice aesthetics of the overall design (i.e. it wouldn’t have come out looking AT ALL like a traditional periodic table.) However, upon close inspection, you find that at least the typefaces are ordered within their family/class groupings.

Does Sex In Advertising Sell?

This World Made Itself: The Intersection of Animation and Performance